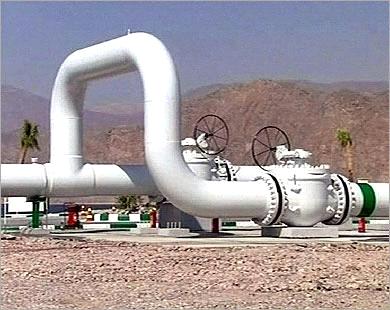 An explosion Friday morning took out a natural gas pipeline in the northern Sinai in Egypt, near the border with Israel. Egyptian national television initially reported that ‘foreign elements’ had sabotaged the pipeline in multiple places, and attacked a government building in the Sinai with gunfire, but later rescinded the report and claimed that the pipeline explosion was an ‘accident’.Right after the explosion, the governor of the province appeared on Egyptian national television, saying that the explosion was an orchestrated attack, and blamed it on ‘foreign elements’, who he also claimed were inciting protests against the current President.

In addition, the Israeli newspaper Ha’aretz quoted an unnamed security source in the Sinai, who said that the pipeline explosion was an act of sabotage, adding, ‘We are now relying on Bedouin leadership in the areas surrounding to help security apparatus with the investigation and give us hints of any other destructive acts. As soon as the gas lines are attacked, the system suspends the flow immediately.’

Tensions between the current Egyptian government and the Bedouins of the northern Sinai have existed for many years, with many Bedouins feeling they are excluded, and do not have a voice in the government.

Egypt supplies around 40% of Israel’s natural gas, which is piped across the border and sold at a heavily discounted rate, on terms negotiated between the current Egyptian regime and the Israeli government. The same Egyptian source also supplies gas to Jordan and Syria, who pay over twice as much per unit of gas as their Israeli counterparts.