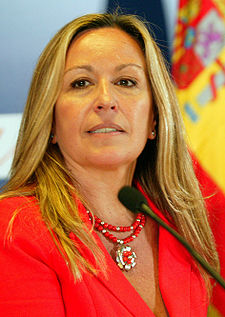 During a visit to Hebron, on Monday, the Spanish Foreign Minister, Trinidad Jiménez, came under a torrent of abuse from the settler group she had agreed to meet.Settler activist Itamar Ben-Gvir, shouted at Jiménez as she left the Ibrahimi Mosque calling her an ‘anti-semite’, an ‘Israel hater’ and telling her that she should ‘get out’.

The settler group had hoped to persuade Jiménez to intervene in the Spanish government’s support of a Palestinian construction project, near to the illegal Israeli settlement of Kiryat Arba. They contacted her by letter prior to her two day trip to the region, her first since assuming office two months ago.

Currently the H2 district of Hebron is inhabited in 30, 000 Palestinians, most of whom live in poverty following the closure of Shuhada Street, and many of the shops in the old city. The region is also populated by approximately 500 settlers who have roughly four members of the Israeli military stationed in the city per settler.

Palestinians regularly suffer from verbal and physical attacks from the settler population, who carry out campaigns in the old city to remove Palestinian residents from their homes, and parade through the old city every Saturday under the protection of the Israeli military.