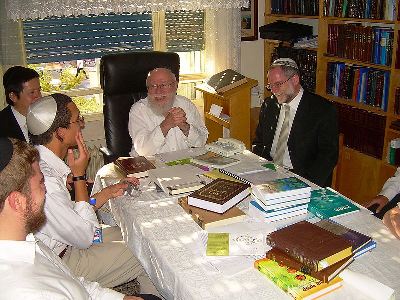 Dov Lior, Chief Rabbi of the Keryat Arba’ illegal settlement in Hebron, in the southern part of the West bank, stated that killing non-Jews is justifiable, in some cases, without any restrictions.His statements are not new as he endorsed a book that justifies killing non-Jews in certain situations.

On Monday, the police issued an arrest warrant against Lior after he refused a request to head to an Israeli police station in the area for questioning.

As the police attempted to reach his home on Tuesday, at least 2000 fundamentalist settlers gathered in front of the place and prevented his arrest.
Israeli Internal Security Minister, Yitzhak Aharonovitch, stated that the arrest warrant issued by the chief of the Israeli police in Hebron is a mistake.

Yossi Dermer, spokesperson of Keryat Arba’ Settlement, told the Israeli Radio that Lior will not cooperate with the police due to what he called “political prosecution in Israel”.

In August of last year, a settler Rabbi who co-authored the book was detained on suspicions of inciting violence, but was released a few days later after an Israeli court decided that the police did not follow proper procedure in the arrest.

The book, called The King’s Torah, was written by Yosef Elitzur and another Israeli Rabbi and reportedly states that “the enemies of Israel, including the babies who will grow to hate Israel, may be killed”.

The book also states that non-Jews are “uncompassionate by nature”, and that attacks against them curb what it calls “evil inclination”.

The books adds, “Anywhere where the influence of gentiles constitutes a threat to the life of Israel, it is allowed to killed them”.

The book was published earlier this year and was endorsed by several Rabbis, yet, it was also strongly denounced by numerous rabbis who said that it contradicts with the teachings of Judaism.

In the late 1980’s, Lior was elected to the Supreme Rabbinical Council, but the Israeli Attorney General barred the election after Lior made statements suggesting that medical experiments can be conducted on “terrorists” captured by Israel.

Following an shooting attack carried out by a lone Palestinian gunman in the Mercaz Harav Yeshiva in March 2008, and the ensuing death of a number of students, Lior issued a ruling stating that “it is forbidden to employ Arabs or rent homes to them”.