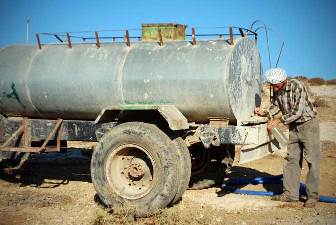 The Palestine News and Information Agency, WAFA, reported Thursday that Palestinian Prime Minister, Dr. Salaam Fayyad, signed an agreement with the French State Minister and Minister of Foreign and European Affairs Michèle Alliot-Marie and General Director of the French Development Agency (AFD) Dov Zerah, under which France will be granting €10 Million in water services in the Bethlehem district. The statement of the Ministry came after a press release was official made by the French Consulate in Jerusalem.

The Ministry said that the project aims at improving the drinking water system and its distribution network, and that this project will improve water services to more than 100,000 consumers by the year 2017.

According to WAFA, the first phase of the project will be implemented by the Palestinian Water Authority and will include the rehabilitation and extension of 25 kilometers of transmission pipelines, in addition to the construction of three reservoirs with a capacity range of 1,000 to 2,500 cubic meters, the construction of 2 pumping stations and the installation of hydraulic equipment.

The donated money will also be used to rehabilitate two existing waste water pumping stations. The two stations are not functional.

This is the first water and sanitation projects financed by France in the Palestinian territories, and the project will be financed through the French Development Agency.

Over the last ten years, the Palestinian Authority used grants provided by the French Development Agency and established more than 400 kilometers of water network and managed to provide an improved access to water for some 800,000 Palestinians.

During summer time, the Palestinians face sharp shortages in water supplies and most of the residents depend of wells as Israel regularly shuts down main pumps heading to the Palestinian territories in order to provide Jewish settlements in the West Bank with an abundances of water supplies for their homes in the settlements, agricultural areas and their swimming pools.