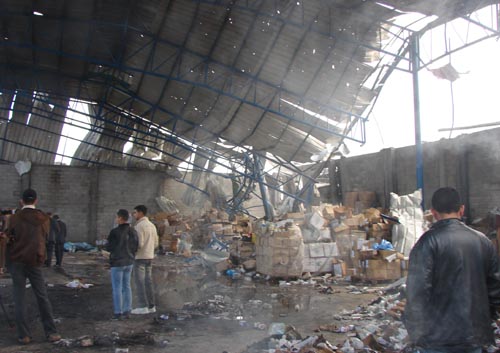 On 09 February 2011, Israeli warplanes bombarded the building of a plastics company in Gaza City, destroying it. A warehouse of medicines of the Palestinian Ministry of Health, a school and a furniture store located near the building were also damaged. Additionally, a factory of textiles belonging to Jawad Mohammed ‘Ouda, 4 stores of wood belonging to Mujahed Mahmoud al-Sousi and a private school sustained partial damages. Eleven residents of the area, including 4 children, 11 Palestinian civilians, including 4 children, were injured by glass fragments and/or went into shock from the attack.

On the same day, Israeli warplanes also bombarded a training site of the al-Quds Brigades (the armed wing of Islamic Jihad) in Khan Yunis. Two resistance fighters sustained bruises when they attempted to flee.

Israel has continued to close Beit Hanoun (Erez) crossing for the movement of Palestinian civilians. Israeli forces have allowed only diplomats, a number of international journalists, employees of international agencies and a limited number of patients who suffer from serious diseases to pass through the crossing. They have continued to prevent Palestinian civilians from visiting their relatives who are detained in Israeli jails. The small number of patients permitted to pass through the crossing is only able to do so under severe restrictions that include prolonged interrogations.

During the reporting period, Israeli forces conducted at least 46 military incursions into Palestinian communities in the West Bank, during which they abducted 27 Palestinian civilians, including 8 children.

In one of this week’s invasions, Israeli forces moved into al-Khader village, south of Bethlehem. They raided a two-storey house belonging to the family of Jameel Salem Balboul, 68, an extended family comprised of 5 small families. They harassed members of the family, especially a 7-year-old child, who was evacuated to the hospital. The officer did not allow members of the family to offer the child first medical aid for 10 minutes. A debate erupted between the officer and two of the child’s uncles. Members of the family were eventually able to offer the child first medical aid and to awake him. He was not able to speak and suffered from pains in the head, the abdomen, the back and the left hand. Israeli soldiers did not allow members of the family to evacuate him to hospital. So, they called Palestine Red Crescent Society, which sent an ambulance that transported him to Beit Jala Hospital, where he was placed under medical observation. The child is still receiving medical treatment at the hospital, and he is facing difficulties in speaking. When Israeli forces left the house, the family found the Israeli soldiers had extensively damaged the house. Israeli soldiers also abducted two of the owner’s sons. The family discovered also that Israeli soldiers had stolen two kilograms of gold and US$ 29,000.

In another of the week’s 46 incursions, on 09 February 2011, a Palestinian child was wounded when Israeli forces moved into ‘Ourif village, south of Nablus, took position in front of its secondary school and fired at a number of children who threw stones at them.

Israeli forces have maintained checkpoints in and around Jerusalem, severely restricting Palestinian access to the city. Civilians are frequently prevented from praying at al-Aqsa Mosque in Jerusalem. There are approximately 585 permanent roadblocks, and manned and unmanned checkpoints across the West Bank.

During the reporting period, Israeli forces used excessive force to disperse peaceful demonstrations organized in protest to Israeli settlement activities and the construction of the annexation wall. As a result, a Palestinian civilian, who is the photographer of the Public Committee against the Wall and Settlement, was wounded, and dozens of Palestinian civilians and international human rights defenders suffered from tear gas inhalation or sustained bruises. Additionally, Israeli forces abducted 4 human rights defenders.

Following the Friday Prayer on 04 February 2011, dozens of Palestinian civilians and international and Israeli human rights defenders organized a peaceful demonstration in Bil’in village, west of Ramallah, in protest to the construction of the annexation wall. Israeli soldiers stationed in the area fired rubber-coated metal bullets, sound bombs and tear gas canisters at the demonstrators. As a result, Haitham Mohammed al-Khatib, 34, a photographer of the Public Committee against the Wall and Settlement, was hit by a tear gas canister to the back, and a number of demonstrators suffered from tear gas inhalation.

Also following the Friday Prayer on 04 January 2011, dozens of Palestinian civilians and international and human rights defenders organized a peaceful demonstration in Ne’lin village, west of Ramallah, in protest against the construction of the annexation wall. They clashed with Israeli troops positioned near the Wall. Israeli troops fired rubber-coated metal bullets, sound bombs and tear gas canisters at demonstrators. As a result, a Palestinian civilian, who has not been identified, was hit by a tear gas canister to the right foot. Additionally, a number of demonstrators suffered from tear gas inhalation.

Also following the Friday Prayer on 04 February 2011, dozens of Palestinian civilians and international and Israeli human rights defenders organized a peaceful demonstration in Beit Reema village, northwest of Ramallah, in protest against land confiscations in the Wad al-Raya area between the villages of Nabi Saleh and Deir Nizam. When the demonstrators attempted to reach areas of land seized by Israeli settlers near ‘Halmish’ settlement, Israeli troops fired rubber-coated metal bullets, sound bombs and tear gas canisters at them. As a result, a number of demonstrators suffered from tear gas inhalation. Israeli forces also abducted 4 human rights defenders, who have not been identified.

Due to the number and severity of Israeli human rights violations this week, the PCHR made several recommendations to the international community. Among these were a recommendation that in recognition of ICRC as the guardian of the Fourth Geneva Convention, PCHR calls upon the ICRC to increase its staff and activities in the Occupied Palestinian Territories, including the facilitation of family visitations to Palestinian prisoners in Israeli jails.

The PCHR expressed appreciation for the efforts of international civil society, including human rights organizations, bar associations, unions and NGOs, and urges them to continue their role in pressuring their governments to secure Israel’s respect for human rights in the Occupied Palestinian Territories and to demand Israel end its attacks on Palestinian civilians.