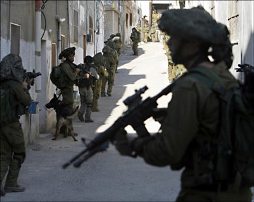 The two were cuffed and blindfolded before being moved to an unknown location.

Furthermore, troops installed a roadblock on the Jenin-Nablus Road, near the
entrance of Ijja village and searched dozens of vehicles causing a traffic jam and obstructing the freedom of movement of the residents.

In related news, clashes were reported in several neighborhoods in Silwan and Ras Al Amoud, in occupied East Jerusalem, after Israeli soldiers and policemen attacked dozens of residents who were celebrating the removal of Egypt’s President from his post.