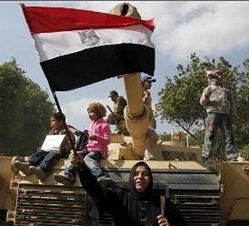 The Higher Council of the Armed Forces in Egypt, currently in power after the resignation of Hosni Mubarak, vowed to ensure a smooth transition of power towards what it called “civil authority that would build a free and democratic country”, and also vowed to respect regional agreements, referring to the Egyptian-Israeli peace treaties. In its fourth statement, Council army said that it is looking forwards to a peaceful transition of power, and assured the Egyptians that it does not want to maintain control and rule the country.

It said that democracy, the main demand of the 18-day Egyptian revolution that ousted Mubarak, will be maintained.

The Council further stated that the Republic of Egypt is committed to all regional and international agreements, an issue that was seen as a message of assurances to the International Community stating the Egypt will respect the 1979 Peace Agreement with Israel.

Furthermore, the Council asked the current Egyptian government that was formed by Mubarak on January 31, to resume its duties until a new government is elected, hinting that the Armed Forced will adhere to the popular demands to form a temporary government that includes all political factions in the country.

Yet, the statement did not include a timeframe, and affirmed that the current stage requires sorting all priorities to ensure freedoms and the rule of the law.

On the ground, the Egyptians celebrated all night long rejoicing the ousting of Hosni Mubarak who ruled the country for more than three decades.

By Saturday afternoon, thousands of Egyptians were still celebrating in the Tahrir ‘Liberation Square’ that became the symbol of what became known as “The January 25 Revolution”.