Village Of Al-Arakib Demolished Yet Again 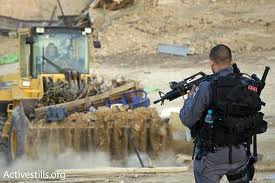 Israel has once again, on Wednesday, demolished the Bedouin village of al-Araqeeb in the Negev desert.

The village, which has been repeatedly demolished and rebuilt in recent months, is not recognized by the Israeli state. Al-Araqeeb has been fighting an ongoing battle for recognition since the establishment of Israel in the historic land of Palestine, in 1948.

Although the villagers have land deeds and receipts of paid taxes dating back to Ottoman times, the Israeli authorities do not accept these as valid. The fate of al-Araqeeb is indicative of a wider problem in Israel, and particularly for its Bedouin community, the majority of whom live in the Negev.

Over 110,000 Bedouin live in so-called ‘unrecognized villages’, many of which – like al-Araqeeb – significantly pre-date the state of Israel itself. Unrecognized villages are not entitled to services that the state provides to recognized settlements, notably water and sewage services, electricity, roads and educational provision.

Problems for villages like al-Araqeeb are likely to intensify as the JNF’s operation “Blueprint Negev” continues. Al-Araqeeb is being demolished in order to facilitate the JNF’s tree-planting operations there. The Alternative Information Center reports that Israeli forces arrived early in the morning and began shooting rubber bullets almost immediately

The residents then protested at being forced from their homes and were again fired upon with rubber bullets. Three children were hospitalized as a result. Residents of the village then fled to the local cemetery where they have, in the past, been safe from force. On this occasion, however, JNF bulldozers approached the cemetery and the exits were blocked.