Army Demolishes A Mosque Near Tubas 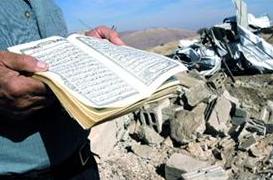 Israeli soldiers demolished on Thursday a mosque located in Khirbit Yirza, near the West Bank city of Tubas, and also removed 10 tents used by farmers and shepherds in the area. Local sources reported that several Israeli military jeeps invaded the village and demolished the mosque for the second time in six months.

After demolishing the mosque and the tents, soldiers also handed orders for the demolition of three homes and animal sheds.

Also, army bulldozers demolished ten tin-houses in Bardala area, near Tubas. This is the second attack of its nature against the village.

The ten tin-houses were initially demolished by the army several weeks ago, and the residents rebuilt them.

The area in question is in the Jordan valley, a main target to the construction of Jewish settlements due to the fertile nature of the lands and the sensitive geographical location.