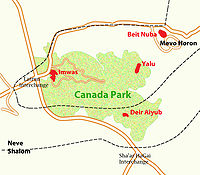 On Monday, Palestinian, Israeli and international activists protested and held vigils in front of Canadian Embassies organized by the Committee for the Defence of the Rights of the Latrun Villages. The Committee represents residents from Palestinian villages that were forcibly expelled from their villages by Israeli occupying forces in 1967. The actions were held in Ramallah in front of the Representative Office of Canada to the Palestinian Authority, as well as the Embassy of Canada to Israel in Tel Aviv.

A Memorandum to the Representative of Canada to the Palestinian Authority in Ramallah and the Ambassador of Canada in Tel Aviv was submitted, protesting on behalf of families of the Latrun villages.

The protests and vigils targeted the Canadian Embassies because of Canada’s role in whitewashing the ethnic cleansing of Palestinians that took place in 1967. It did this by helping fund the construction of a park, “Canada Park”, on the lands of the destroyed villages. The park currently serves as a recreational space for Israelis.

The Canadian arm of the Jewish National Fund (JNF) was responsible for erecting “Canada Park”, after Israel occupied the West Bank in 1967. The park is located on the land where the Palestinian villages of Imwas, Yalo and Bayt Nuba used to be situated. The village’s residents were uprooted and are now refugees in the West Bank and Jordan.

“Canada Park was planted and funded with the support of the Jewish National Fund of Canada over the lands and over the ruins of three ethnically-cleansed villages: Imwas, Yalu and Beit Nuba, occupied and ethnically cleansed in the course and the wake of the 1967 war,” Dr. Uri Davis told the Alternative Information Center (AIC).

“The ethnic cleansing was perpetrated by the Israeli army, not the JNF, but the JNF is complicit in this crime against humanity by veiling and covering up the crime, planting the Canada Park over the lands and over the ruins, and presenting itself as an environmentally-friendly organization concerned with public will and recreational welfare of all citizens of Israel.”

Participants carried banners reading: “Canada Park is Complicit with a Crime Against Humanity Perpetrated In Our Villages,” “We Demand That The Government of Canada Recognise and Act to Implement the Rights of the People of the Latrun Villages,” and, “We Demand the Nullification of the Legal Status of the Jewish National Fund (JNF) in Canada.”

The Committee for the Defence of the Rights of the Latrun Villages has repeatedly requested that the Representative Office of Canada to the Palestinian Authority in Ramallah meet with the Ambassador of Canada to Israel in Ramallah so that they can together visit the remains of the destroyed villages over whose ruins the Jewish National Fund (JNF) has planted ‘Canada Park.”

“Most representatives of the destroyed Latrun villages are not able to come to Tel Aviv to meet the Ambassador, it is our request that the Ambassador arrive in Ramallah, meet the people concerned and with a delegation of the destroyed, ethnically cleansed villages, visit Canada Park and submit an official report of his fact-finding to his government,” Dr. Davis said.