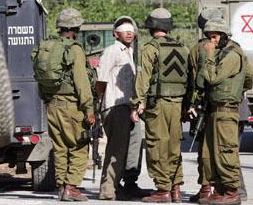 Israeli soldiers abducted, on Tuesday, a political leader of the Hamas movement in the northern West Bank city of Nablus, after breaking into his home and ransacking it.Sheikh Awadallah Eshtayya, was taken after the soldiers violently broke onto his home in Salem village, east of Nablus. Soldiers cuffed and blindfolded him before forcing him into an armored vehicle that took him to an unknown destination.

Local sources reported that several Israeli military vehicles invaded Salem after sealing off all of its entrances.

Eshtayya is an elected member of Salem municipal council, and was repeatedly abducted by the Israeli army in the past, having spent a total of ten years behind bars at separate intervals.

He was also imprisoned for ten months by the Palestinian security forces in the West Bank and was only released a few months ago.

Also on Tuesday, soldiers kidnapped more than ten Palestinians in the occupied West Bank, including five who were kidnapped in Beit Forik, east of Nablus.