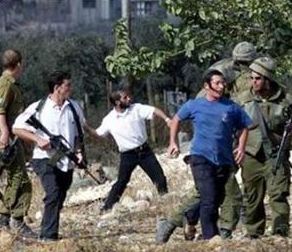 A group of armed extremist Israeli settlers attacked, on Tuesday, at-Tiwana village, near the southern West Bank city of Hebron and uprooted several olive trees.Eyewitnesses reported that settlers of the Maoun illegal outpost invaded the village and uprooted several trees while the Israeli army stood by and did not attempt to stop them.

Local sources said that this attack is one of many similar attacks carried out by the settlers who repeatedly uprooted bushes and trees.

The sources added that the settlers recently carried out repeated night attacks against the village and its orchards.

In related news, several residents were wounded, on Tuesday evening, after a group of armed settlers attacked Burin village, south of the northern West Bank city of Nablus.

The settlers attacked several homes and hurled stones at the residents and their property leading to damages and several injuries among the residents.