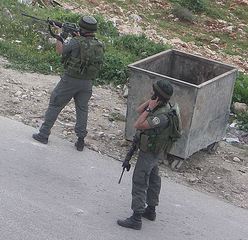 Israeli soldiers invaded, on Tuesday afternoon, Tallousa village, north of the northern West Bank city of Nablus and blocked a number of roads.Local sources reported that several armored military jeeps invaded the village from several directions and provoked the residents. No arrests or clashes were reported.

Soldiers also installed a number of roadblocks at roads leading to the village and detained a number of youths who were interrogated by security officials who participated in the invasion using special armored security vehicles.

The army did not conduct any arrests during the invasion and withdrew from the village later on.

In related news, Israeli soldiers carried out a limited invasion in al-Qarara area, in Khan Younis, in the southern part of the Gaza Strip, and uprooted several farmlands.

Sixteen Palestinian residents were kidnapped on Tuesday at dawn and during early morning hours during a number of Israeli military invasion targeting several cities and villages in the occupied West Bank.

Most of the invasions and arrests were carried out in the districts of Jenin, Nablus and Bethlehem.