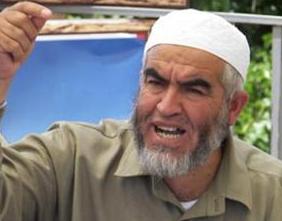 Islamic Resistance Movement, Hamas, slammed the detention of Sheikh Raed Salah, head of the Islamic Movement in Israel, and considered the act as a “new Zionist crime against the Palestinian people”.The movement said that this imprisonment, that was carried out on Tuesday, will not stop sheikh Salah from defending his land and the holy sites.

Sheikh Salah was in Jerusalem when he was taken by Israeli soldiers and members of the so-called Border Guard units.

Sheikh Salah was heading to his native city, Um al-Fahem, from Jerusalem when his car was intercepted and attacked by several policemen who took him on suspicion of involvement in an arson of a Jewish National Fund forest.

The incident took place approximately one hour after he attended a peaceful protest at the protest tent in al-Bustan neighborhood in Silwan.

It called on human rights groups to intervene for the release of Sheikh Salah, and to stop the ongoing Israeli violations against the residents and their homes in the occupied city.

Sheikh Salah has been repeatedly incarcerated and interrogated by the Israeli police, and also received several “ court orders” forbidding him from entering Jerusalem as Israel claims he “incites violence” during protests in the city.

He was also one of dozens of activists who were kidnapped after the Israeli navy violently attacked and boarded the Turkish solidarity ship, the Mavi Marmara, that was part of the Freedom Flotilla that attempted to reach Gaza to challenge Israel’s illegal siege on the coastal region and to deliver humanitarian and medical supplies.

Nine activists were killed and dozens were injured in the attack that took place during early dawn hours of May 31, 2010.