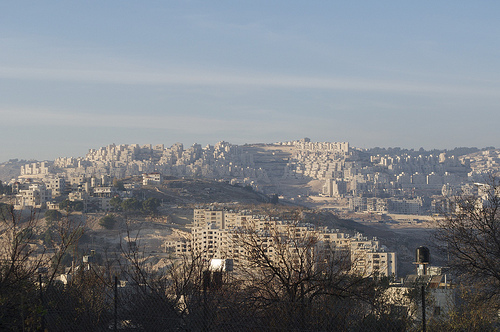 The Israeli run Jerusalem Municipality has not approved, on Monday, plans to extend the illegal settlement of Har Homa.Plans had been submitted for approval to extend the settlement, considered part of Jerusalem by the State of Israel, by a further 60 acres, and it has been speculated that the rejection of plans are, at least in part, a result of international political pressure, following the U.S. decision to veto the Palestinian attempts to have Israeli settlement activity condemned by the U.N. Security Council.

The settlement is located on a hill in the West Bank, known as Abu Gneim in Arabic, north of Bethlehem and had previously been covered in woodland that was supposed to be part of the protected green area around Jerusalem.

In 1997 deforestation began on Abu Gneim, and although a settlement in the West Bank, construction continued through out the recent “settlement freeze” as the State of Israel considers the town to be an extension of Jerusalem.