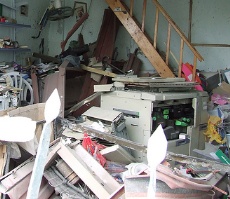 Palestinian medical sources reported on Wednesday evening that a Palestinian child was killed, and three residents were wounded, in an explosion that took place in Khan Younis, in the southern part of the Gaza Strip.The sources stated that a 10-year-old girl was killed in a blast that rocked a home in Al Amal neighborhood in Khan Younis. Three other residents were injured and were moved to Nasser Hospital in the city.

The child was identified as Wafa’ Ali Nashasy, 10. One of the three wounded Palestinians is an elderly man; he suffered mild injuries, medical sources reported.

On Wednesday morning, the Israeli army killed a fighter of the Al Quds Brigades, the armed wing of the Islamic Jihad during clashes that took place with Palestinian fighters east of Gaza city as the Israeli army was invading the area.

On Wednesday at night, the Israeli Air Force bombarded several areas in the Gaza Strip wounding at least sixteen Palestinians, one seriously.

The attacks targeted an agricultural area in Khan Younis, in southern Gaza, and a number of areas in Gaza city.

One of the bombarded areas is believed to be used as a training center for the Al Quds brigades; two residents suffered mild-to-moderate injuries.

Israeli sources reported Wednesday that for the first time since the war on Gaza two years ago, a grad missile reportedly fired from the Gaza Strip landed in Beer Sheva causing damage to a number of houses and vehicles and leading to “anxiety attacks” among ten Israelis, including four children.

The army said that a retaliation strike was carried out in Gaza leading to “a direct hit on a target” and inflicting injuries on three Palestinians.