‘Why I tried to arrest Avigdor Lieberman’ 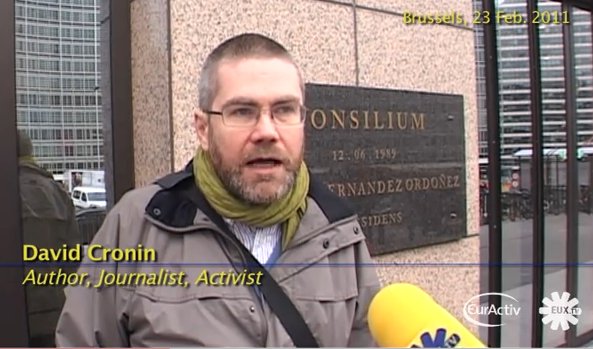 If apartheid is a crime, there is only one way to treat its practitioners: arrest them. That is precisely what I tried to do when I confronted Avigdor Lieberman, the architect of a series of laws designed to make Israeli apartheid even more draconian than it already is.As the Israeli foreign minister was about to give a press conference in Brussels today, I stood in front of him and shouted: ‘Mr. Lieberman, this is a citizen’s arrest. You are charged with the crime of apartheid. Please come with me to the nearest police station.’ I was about to explain the charge further but two security guards had already whisked me away from Lieberman and his inscrutable glare. So I shouted ‘Free Palestine’ and ‘Israel is an apartheid state’ to underscore my point.

My action will probably lead to the confiscation of the badge that had given me access to the headquarters of the EU’s main institutions. Most journalists to whom I have spoken in the past few hours appear to view this as a major issue. For me, it is a trivial one. Palestinians are deprived of liberty every day because of the policies pursued by Lieberman and his government colleagues. Compared to the restrictions on movement caused by military checkpoints in the West Bank or by that medieval blockade of Gaza, the loss of my press card is of no consequence.

The decision to confront Lieberman was taken following a recent visit to the occupied Palestinian territories. Spending a Friday afternoon in the Silwan area of East Jerusalem felt like being transported back to Derry or Belfast in the early 1970s. I was shocked by how Israeli soldiers and police in full riot gear were firing tear gas at young boys who were doing nothing more sinister than throwing stones at the forces of occupation.

It was my first time in Silwan in almost two years and there had been a marked proliferation of Israeli flags there since my previous visit. That was a sure sign that Palestinians who have lived in East Jerusalem for many generations are being forced from their homes to make way for Israeli settlers. The dispossession is taking place so that an extremist group called Elad can realize its plans for the City of David archaeological park. With the official blessing of the Israeli state, Elad believes that Israeli settlers have more rights to live in the area than its actual residents, because remnants of a three-millennia-old royal palace may have been discovered in Silwan.

Apartheid is the best word I can think of to describe the machinations of these settlers and their friends in government. Although apartheid is synonymous with South Africa, it has been recognized as a crime by the United Nations since 1973. The relevant UN convention refers to the dominance of one racial group over another. Israel was always intended to be a state based on a toxic notion of racial supremacy; Theodor Herzl, the ‘founding father’ of political Zionism, wrote back in 1896 that he wished to set up ‘an outpost of civilization against barbarism.’

More than a century later, Avigdor Lieberman is giving practical effect to Herzl’s blueprint. In the two years that Lieberman and his party Yisrael Beiteinu (Israel Our Home) have been in government, approximately twenty new laws and bills have been brought before Israel’s parliament, the Knesset, with the specific aim of copper-fastening Israeli apartheid. The party is seeking to make Palestinian citizens of Israel — who comprise about one-fifth of the country’s population — swear an oath of allegiance to a ‘Jewish and democratic state,’ crack down on commemorations of the Nakba (the ethnic cleansing which led to Israel’s formation in the 1940s), and limit the rights of Palestinian prisoners to meet lawyers. Just last week, the Knesset held a debate about a proposal to outlaw activities promoting a boycott of Israeli goods or institutions.

If you get a sense of deja vu reading about the measures favored by Lieberman, it is because they bear many similarities to those introduced by the white minority government in South Africa during its apartheid era.

As well as being recognized as a crime by the UN since the 1970s, apartheid has more recently been one of the offenses covered by the Rome Statute, under which the International Criminal Court was founded. The EU is nominally a strong supporter of the ICC, yet the Union’s representatives have mostly kept their mouths shut about Israeli apartheid and its consolidation.

Apartheid is not the only crime on my mind right now. Bertrand Russell, the great British intellectual, once referred to the crime of silence. This is a crime that the EU commits when it embraces Lieberman, as it did this week. If our politicians are silent, then it falls to ordinary people to shout as loud as they possibly can.