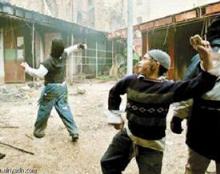 For the second day in a raw, a group of fundamentalist settlers of the Yitzhar illegal settlement, near the northern West Bank city of Nablus, invaded on Saturday at dawn Burin Palestinian village, and torched a vehicle that belongs to a local resident.Eyewitnesses reported that the settlers torched the vehicle of resident Bashir Al Zibin, and also torched his front yard.

On Friday at dawn, the settlers invaded the village and torched a bulldozer that belongs resident Ibrahim Eshtayya.

The two attacks are part of a series of attacks carried out by Jewish settlers against several villages in the Nablus district.

Yitzhar settlement was built on Palestinian lands in southern Nablus, and were illegally expropriated by the Israeli government in 1983.

The settlement of Bracha was also built on lands that belong to residents of Burin village, north of Nablus. Israel confiscated 300 Dunams owned by residents of the village in order to build the illegal settlement.

Iraq Burin is subject to frequent attacks carried out by the settlers who are frequently protected by the Israeli army. Most of The village’s lands are off-limits to the residents due to illegal settlements and settlement outposts.