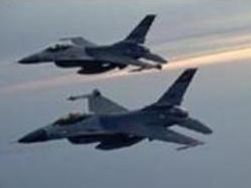 The Israeli Air Force conducted on Saturday at dawn a series of Air Strikes targeting a number of areas in the Gaza Strip leading to excessive damage; no injuries were reported until the time of this report.Local sources reported that Israeli F16 Fighter-Jets bombarded a land near the Al Boreij Refugee camp leading to damages; no injuries.

Later on, Israeli F16’s fired four missiles into an area believed to be used as a training zone for the Al Quds Brigades, the armed wing of the Islamic Jihad. The targeted area is located west of Khan Younis, in the southern part of the Gaza Strip; damage was reported, no injuries.

The Israeli army claimed that all bombarded areas are used as training grounds by fighters of the Islamic Jihad and the Hamas movement.

Israeli Ynet News reported that explosions were heard in Netivot and the surrounding areas after the “Color Red” alert system was sounded approximately at 10:30 PM on Friday.

The Ynet added that a Qassam homemade shell, fired from Gaza, landed in an area close to Sdot Negev Regional Council causing no damages or injuries. Another shell fired from Gaza did not make it into any Israeli territory and landed in Gaza.