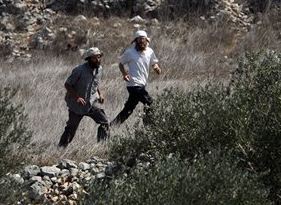 Faraj Al Na’aas, head of the Al Mogheer village council, reported that the settlers sprayed chemicals on the wheat before uprooting it using a tractor.

He added that the lands in questions became off-limits to the local residents due to the
Annexation Wall surrounding the lands. The residents can only enter their lands if granted a special permit issues by the Israeli Coordination Office.

A local shepherd stated that he saw a tractor uprooted the wheat under guard by armed settlers, and that the color of the wheat turned yellow from blow due to exposure to chemicals.

The settlers previously uprooted dozens of trees in the same area and also sprayed farmlands with chemicals to prevent the residents from planting them.

In related news, a group of settlers uprooted 150 Dunams of farmlands that belong to residents of Tormos-Ayya village, near Ramallah. The settlers also sprayed the lands in question with chemicals.