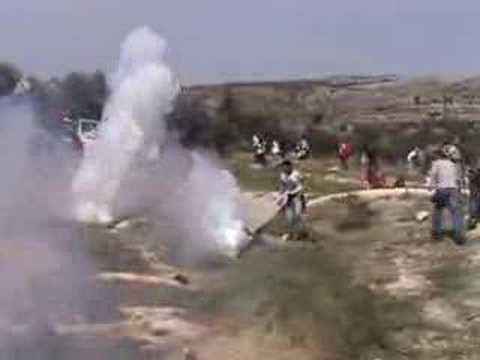 In the central West Bank villages of Bil’in, Nil’in and Nabi Saleh, non-violent protests were held Friday afternoon to challenge the Israeli Wall construction and support the Libyan people in their uprising against Moammar Gaddafi.In Bil’in, as has been the case every Friday for the past six years, international and Israeli supporters joined the villagers after the midday prayers and marched up to the gate of the wall separating villagers from their land.

Soldiers stationed at the gate attacked people with tear gas and rubber coated steel bullets. One man from Bil’in was suffered injury to his hand and many others were treated for the effects of tear gas inhalation. In 2007 the Israeli High Court of Justice ruled that the Annexation wall in Bil’in was illegal and should be rerouted, returning half of the land taken to build the wall to the villagers. The army still refuses to implement the court’s order.

In the nearby village of Nil’in, Israeli and international supporters marched with villagers after midday prayers to the wall. A number of protesters suffered the effects of tear gas inhalation.

Two men were mildly injured and an Israeli activist was arrested by soldiers as they attacked the weekly anti wall and settlements protest in the village Nabi Saleh.

Soldiers forced people back to the village using tear gas and sound bombs, and then attacked people’s homes with tear gas. The weekly protest ended with clashes between local youth and soldiers.