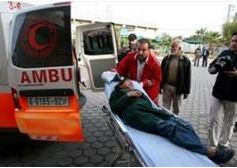 Palestinian medical sources reported, Monday morning, that one resident was injured after the Israeli army bombarded an area near the Gaza International Airport, east of Rafah, in the southern part of the Gaza Strip.The army fired several shells into the area causing damage, and moderately wounding one resident. The wounded resident was moved to Abu Yousef al-Najjar Hospital in Rafah.

The Airport remains nonoperational, as it has been since the beginning of the Second Intifada in late September 2000, and was frequently bulldozed and bombarded by the army.

On Sunday evening, one fighter of the al-Quds Brigades, the armed wing of Hamas, was killed and several residents were injured when the army bombarded Gaza.

The army claims that resistance fighters have stepped-up their attacks against adjacent Israeli areas by resuming the firing of homemade shells.