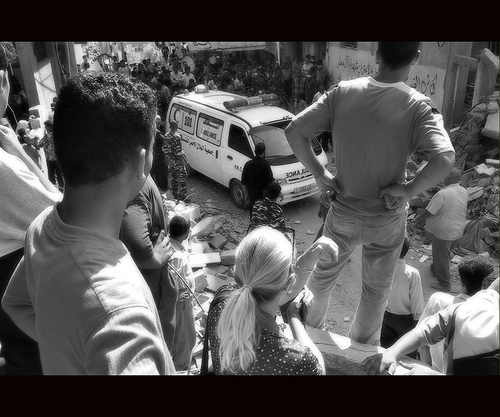 An ‘internal investigation’ by the Israeli military released a report, Sunday, stating that there was ‘no wrongdoing’ in a 2002 targeted assassination carried out by the Israeli airforce, in which Israeli soldiers dropped a missile on a crowded apartment building, killing a targeted leader of Hamas along with 13 civilians, including 8 children.The investigation began in 2008, 6 years after the incident took place, making any investigation of the scene of the attack impossible. Israeli internal investigators interviewed only the soldiers involved in the bombing, and did not talk to any of the victims of the attack during the course of their 2 year long investigation.

In their report to current Israeli Prime Minister Benjamin Netanyahu, the appointed investigators stated that the bombing was justified and ‘imperative’, stating that the ‘targeted killing against Shehadeh was imperative because of the increase and escalation in terrorist attacks since 2000.”

The attack in question took place on July 22, 2002, just hours after Hamas officials had managed to negotiate a unilateral truce with all major Palestinian armed factions. The groups all pledged to halt attacks against Israeli civilians, after a long and difficult diplomatic effort by Hamas political leaders.

Later that night, when the Israeli airforce dropped the bomb on Hamas leader Salah Shehadeh, his family and his neighbors, the truce predictably fell apart. The morning of July 23, 2002, then-US President George W. Bush announced an additional aid package for Israel, making many Palestinians angry that the US would offer new aid to Israel in the immediate aftermath of a bomb that tore apart eight children and 5 of their parents.

According to the newly-released report by the Israeli internal investigators, the Israeli airforce dropped the bomb with the expectation that there would likely be civilian casualties, but that this would be preferable to a ground operation which could have put Israeli troops in danger.

The report concluded, “Despite the outcome which resulted in this instance, the means of targeted killing was and continues to be a lawful tool in the war against deadly terrorism, provided that the operation is carried out in accordance with the principles and rules set out by Israeli and international law and the ethical and moral norms on which they are based.’

This conclusion was made despite the fact that targeted assassinations are clearly illegal under international law and the Fourth Geneva Convention, to which Israel is a signatory.

Investigators cleared all officials involved, and recommended that there be no prosecutions of any soldiers, officers, or Israeli officials for their involvement in the case.