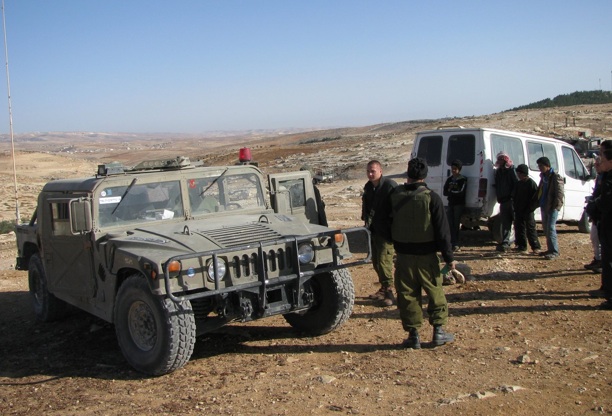 Jenin-Palestine – An Israeli military force invaded, on Thursday morning, the village of Al-Arqa west of Jenin, Palestinian media sources reported.Troops patrolled the village going through the allies and the main squares and beefed up its forces in the surrounding villages.

Troops also setup and military check post outside of the village Arraba, south of Jenin. Eyewitnesses reported that dozens of Israeli vehicles arrived into the area and patrolled the villages near the West Bank city of Tubas.

Local residents expressed concerns regarding this heavy military presence, however, no clashes or arrests have been reported.

Israeli officials has been on high alert as the United Nations General Assembly meeting in September is approaching. Israel is expecting several demonstrations in the occupied West Bank after the UN meeting, where the Palestinians will request a UN recognition of an independent Palestinian State on the West Bank, Gaza Strip and East Jerusalem.

The PA have repeatedly confirmed that it will not allow demonstrations and protests to exit the PA controlled areas, to avoid friction with the Israeli Military and settlers.

Israel on the other hand, has been training the West Bank settlers to encounter Palestinian demonstrators and equipped them with tear-gas and rubber bullets. Settlers are generally armed with hand guns and automatic rifles.