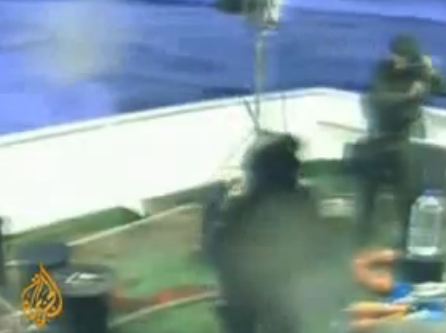 The New York Times published Thursday the leaked Palmer report on the Israeli attack on the MV Marmara Turkish ship that was heading to Gaza to deliver humanitarian supplies on May 31, 2010.Israeli commandos attacked the Turkish ship in international waters on May 31, 2010, killing nine solidarity activists and wounding dozens, before towing the ship to Ashdod Port.

The leaked Palmer report states that Israel used excessive force in attacking the ship, and that autopsy performed on the bodies of the nine slain activists revealed that seven of them were shot by multiple rounds of live ammunition in their backs, an indication that they were not in confrontation with the soldiers.

Yet, the report also concludes that the ships violated the Israeli Naval blockade on Gaza, a blockade its described as “legal under international law”.

The 105-page report is expected to be fully published Friday. It recommends that Israel expresses “regret” for the attack, and pay compensation to the families of the victims.

The Marmara ship was one of six ships carrying 600 activists who were attempting to reach the besieged Gaza Strip to deliver thousands of items of medical and humanitarian supplies and equipment, educational and food items.

After the report was leaked, Israel’s Mission at the UN had no immediate comment. The UN also had no comment on the report, while UN deputy spokesperson, Eduardo Del Buey, said that he did not receive or read the report to comment on it.

The attack on the Turkish ship strained the Israeli-Turkish relations, while Ankara also recalled its ambassador to Tel Aviv.

Turkey is demanding an official Israeli apology, and compensation to the families of the victims, but Israel is refusing to issue any official apology that could lead to prosecuting its commandoes and officials involved in the attack.

Participating at a news conference in Paris, the Turkish FM said that he raised the issue during a meeting with UN Secretary General, Ban Ki-moon, adding that the UN was also surprised by the leak.

Yet, Davutoglu said that, regardless of the findings of the Palmer report, the Turkish demands will remain unchanged; an official Israeli apology, compensation to the families of the victims, and ending the Israeli blockade on the Gaza Strip.