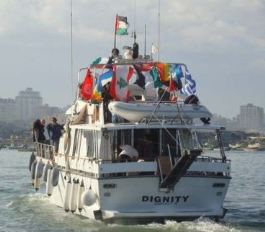 The Authorities in Greek prevented the “Dignity” solidarity ship from sailing to the Gaza Strip to deliver humanitarian supplies.Ship organizers reported that Greek coastguards held the ship in Crete Island, south of Greece, after receiving a direct order in this regard.

Claude Leostic, spokesperson of the solidarity ship, told France Press Agency that the Dignity ship was moved to the Sitia Port in Crete after it was intercepted by the Greek coastguards as it was refueling in a nearby port.

The Palestinian Network for Nongovernmental Organizations (PNGO), denounced the issue, and demanded the government in Greece to allow the ship to sail to Gaza.
It described as incident as an “unjustifiable act”, adding that the ship carries a humanitarian mission.

In a press release, the PNGO stated that the human rights activists are determined to sail to Gaza, and will always act against the illegal Israeli siege on the coastal region.