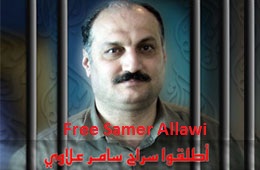 Dozens of Palestinian journalists held a non-violent protest Saturday in Gaza City outside the offices of the United Nations. They called on UN officials to pressure Israel to release their colleague, reporter Samer Allawi, who has been held in Israeli detention since August 10.Allawi was abducted by Israeli forces at the Israeli-controlled border crossing between Jordan and the West Bank, while he was returning to his home in Nablus district after a three-week vacation.

Israeli intelligence agents reportedly questioned Allawi about his work as a correspondent in Afghanistan, where he served as Al Jazeera’s bureau chief. They then took him to a detention camp, where he is being held without charge in what Israel terms ‘administrative detention’.

The detention of Samer Allawi has been condemned by media agencies worldwide, as well as media rights groups like Reporters Without Borders, who say that the detention of journalists violates the freedom of the press.

Adel Zanoun, the director of the Doha Media Center, spoke at the protest on Saturday and stated, ‘As journalists, we came here today to ask Israel to immediately release Samir Allawi and all other journalists detained in Israel. The only crime those journalists committed was doing their jobs and defending the freedom of the press and freedom of expression.’

Al Jazeera journalist Wael Dahdouh also spoke at the rally, pointing out the dangers faced by journalists working throughout the region, and honoring a colleague killed in Libya last month while reporting on the events taking place there.