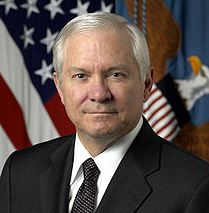 Robert Gates, former U.S.. Secretary of Defense, strongly criticized Israeli Prime Minister, Benjamin Netanyahu, for his polices adding that the policies of Netanyahu indicate that he is not grateful to the U.S.., and is isolating Tel Aviv on the international level.The statements of Gates came during a meeting for the National Security Council Principals Committee.

Israeli Ynet News reported that Gates in convinced that the Netanyahu government in Israel is no doing anything to show it appreciates the “generous security aid, including advanced weapons, the U.S. assistance in developing anti-missile systems and the advanced intelligence-sharing between Tel Aviv and Washington.

The American official further stated that the polices of Netanyahu do not only indicate he does not appreciate the U.S.. support, but also endanger Israel itself as it is becoming more isolated on the international level.

He also stated that, besides isolation, should Israel keep its control on the West Bank, it will also face demographic challenges.

Earlier in March last year, and as U.S. vice president, Joe Biden, was visiting Israel and a few hours after he expressed ongoing American support to Israel, the government of Netanyahu announced new plans for settlement construction in occupied East Jerusalem.

Following the announcement, Gates expressed frustration over the policies of Netanyahu, and stated that the Israeli Prime Minister should only call president Obama “when he is serious about peace talks”.

In March this year, visiting Tel Aviv, Gates held a meeting with Netanyahu who strongly denounced the U.S.. over American arm sales to Arab countries that are considered allies with Washington.

During the meeting, Netanyahu practically lectured Gates over what he called the dangers such weapons, handed to US-Arab allies, would pose on Israel.

The Ynet News said that the American frustration with Israel is increasing, especially while Washington is challenging the international community and is gearing to foil the Palestinian UN move this month seeking international recognition of statehood.

Several American officials stated that Washington will most likely use its veto power to topple the Palestinian- move at the UN Security Council despite large international support to the move, as the U.S. believes this move is counterproductive and would also “undermine peace talks”.

Washington wants the resumption of peace talks between Israel and the Palestinians, and is convinced that a Palestinian state can only be established through talks. But Israel wants to hold talks on one hand, and construct and expand Jewish settlements in the occupied territories, including East Jerusalem, on the other.

The Palestinian Authority had to quit the talks due to these issues, and due to the ongoing Israeli violations, invasions and assassinations.