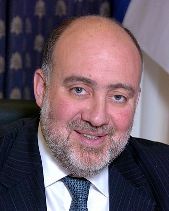 In an interview with conservative Israeli newspaper, Maariv, Prosor said that Israel is very active in lobbying against the Palestinian decision to ask international recognition of statehood.

The ambassador added that the meetings aim at convincing the world that the only means for peace and for establishing a Palestinian state is through negotiations, and not through what he called “unilateral Palestinian decisions”.

Meanwhile, the Palestinian Authority has officially started its campaign as its representative at the U.N. sent a letter Thursday to Ban Ki-moon urging him to exert all needed efforts to ensure the Palestinians achieve their legitimate demands.

Furthermore, Palestinian President, Mahmoud Abbas, will be addressing the General Assembly on September 23.

Abbas stated that heading to the UN is a legitimate right especially after years of talks with Israel failed to achieve peace while Israel continues its violations in the occupied territories, and continues to build illegal settlements.