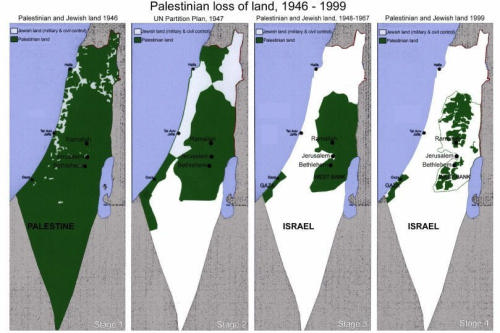 So, we are heading to United Nations to seek recognition of Palestinian statehood, keeping our fingers crossed that the United States will do what became a habit every time the UN or the security council discusses issues related to Israel, its occupation and its ongoing violations.

I am talking of course about the unwanted word, the damaging US veto that protects war criminals from being prosecuted in international courts, and protects the illegal Israeli occupation in Palestine.

Regardless of what I personally think, or what anybody thinks about the UN move, the fundamental issue here is that the Palestinians have the right to live in their independent state, have the internationally guaranteed right to liberation, to the Right of Return, to be in control of their own fate and future.

Of course Israel and the United State have the power, and the money, and like story of the carrot, they can cut all sources of aid to the Palestinian Authority in the West Bank, and completely shun it forcing it to collapse.

The P.A. is bargaining a lot here, betting on its allies, and most dangerously betting of the continued financial support of the Arab countries. Millions have been pledged by Arab states, some pledges came true in a way or another, but most did not.

The U.S is currently playing a diplomatic game, sending David Hale, to talk President Mahmoud Abbas into voiding the U.N move, while numerous officials such as U.S. Secretary of State, Hilary Clinton, and Foreign Secretary spokesperson, Victoria Noland, are “urging Abbas to listen to the U.S message”, or in other words to “behave in order not to be grounded”.

Israeli and American leaders are claiming that the Palestinian move in a dangerous one, a big mistake that could lead the region into further deterioration and violence.

Israel has the “day after” plans already in place, deploying thousands of more soldiers, while the illegal settlers also have their own plans, plan to attack, plans to act like the army they were armed and trained to be, not that they didn’t do that before!!

Washington is waving its threat of veto, nothing new here, through the years, Washington used its Veto power dozens of time to “protect Israel”, or in other words, to prevent Israel from being obliged to end its illegal occupation, illegal control and theft of Palestinian lands, and illegal violations and attacked.

The United States used its first veto at the United Nations Security Council on March 17, 1970, under president Richard Nixon, and his National Security Adviser, Henry Kissinger. It veto back then came in support of Britain as it was pressured into ending its white minority rule in southern Rhodesia.

The second U.S. veto came on September 10, 1972, and this time this veto came to shield Israel. This veto was the beginning of a long series of US vetoes supporting Israel and protecting its illegal occupation.

So, U.S. veto seems to be as clear as the bright mid-summer sun, and threats of isolating the Palestinian Authority and pushing it into bankruptcy are on the rise.
Washington is saying peace talks are the only means to reach a peaceful solution, and establishing a Palestinian state, living in peace next to Israel.

But, years of negotiations starting in the early nineties, have led massive construction and expansion of illegal Jewish-only Israeli settlements in the occupied territories, more violations in Jerusalem, and more expulsion of its indigenous population.

Consecutive Israeli governments made it clear that Jerusalem is a red line that cannot be crossed, so no talks in Jerusalem, the internationally guaranteed Right of return of the Palestinian refugees is also a red line, borders – red line, natural resources—red line, justice… hmm red line.

So let’s go to the UN and let’s present our message, countries that believe in peace and freedom, and I hesitate to say including the United States as it claims to be the protector of freedom and human rights, should know that heading to the United Nations is a legitimate right to demand legitimate rights that have been lost or forgotten throughout the years.

Is it a threat to peace? a threat to Israel? definitely not, it is just a threat to the Zionist ideology, an ideology that does not believe in peace or the Palestinian rights in their own land.

So, despite my enormous reservations on the Palestinian Authority and its actions, I say go ahead, go to the UN, deliver a message, tell the world the Palestinians want peace, long for freedom and independence, tell the U.S “you waged wars under the guise of protecting democracy and human rights”, now we don’t want you to go to war, we want you, to stand by what is right, for a change.

The very likely (most certainly) veto should not be the end; it should be the beginning of a long international political move that must be supported and kept alive.

The peace process the United States wants the Palestinians to go back to is supposed to lead to a two-state solution, but what solution, what two-states, the land of Palestine has been vanishing since the first day of Israeli occupation, and am not only talking about 1967 or 1948.

So, if the word “PEACE”, or Shalom, or Salaam, has different meanings in different languages, it should only mean justice, justice that must be achieved before peace itself. Peace should mean equal rights, dignity, independence and liberty. Justice comes before peace, justice leads to peace and to human rights.

Protecting the occupation, protecting the settlements ‘that are considered war crimes under international law’, is not peace and will never lead to stability.

More than 120 countries around the world have expressed support to the Palestinian UN-bid; of course even with a minority opposing it, a veto from the U.S will topple it.

Last year, American President, Barack Obama, said that he hopes a Palestinian State could be admitted to the United Nations when world leaders gather at the General Assembly in 2011. Mr. President, its 2011, it’s your move now!