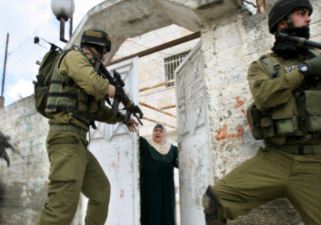 Israeli soldiers invaded, Thursday morning, the northern West Bank city of Nablus and demolished three wells, while army bulldozers uprooted farmlands in the Nablus district. Armed Israeli settlers also wrote graffiti on a local mosque.Ghassan Douglas, in charge of the settlements file for the northern part of the West Bank at the Palestinian Authority, stated that the army is conducting several invasions in the West Bank, especially in Nablus.

He told the Quds Net online daily that this campaign is taking place while the settlers attacked several villages and towns near Nablus, and wrote racist graffiti on the walls of a mosque in Yitma village.

The settlers also torched two Palestinian cars that were parked at the main entrance of Qablan town, near Nablus, and uprooted dozens of trees in Huwwara town.

On September 5, a group of extremist Israeli settlers broke into a mosque in Qasra village, near Nablus, and torched it after destroying its property and writing anti-Arab slogans on its walls.

Earlier in June this year, settlers from the illegal outpost of the Alei Ayin set fire to a mosque in al-Mughayyir village, near the central West Bank city of Ramallah, after burning tires and throwing them in the mosque causing serious damages.