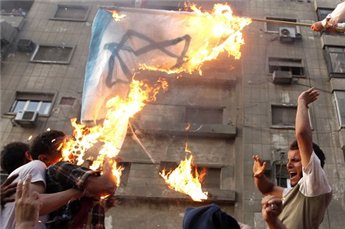 The Supreme Council of Armed Forces in Egypt, which has served as the interim government since the resignation of autocrat Hosni Mubarak in February, on Sunday rejected the resignation of Interim Prime Minister Essam Sharaf, in the midst of chaotic protests outside the Israeli embassy in Cairo.The Egyptian Council also reiterated its full commitment to secure and maintain diplomatic relations between Egypt and other nations, including Israel, after protesters stormed the Israeli Embassy in the Egyptian capital of Cairo.

In its statement, the Supreme Council of Armed Forces confirmed its commitments to all international accords including diplomatic relations.

“The Council has rejected the resignation of the caretaker Egyptian Prime Minister, Dr. Essam Sharaf,” said the statement.

The statement, read by Minister of Information Osamah Haykal on the official Egyptian TV channel, also says that a state of emergency has been implemented to maintain security and crack down on law breakers.

“From now on, Egyptian security forces will implement tightened measures to maintain security, including using its legitimate right of self-defense” the statement assured.

The statement did not discuss the details on how security forces would maintain security and self-defense, but did maintain that it would hold accountable those who involved in the siege on the Israeli Embassy in Cairo, adding that the perpetrators would be presented to the Supreme State Emergency Security Court – which is formed by the emergency law, and whose verdicts cannot be appealed.

The statement claimed that Egypt is experiencing a difficult period, in which some people are threatening the security of the state. It accused the protestor who besieged the Israeli embassy of lawbreaking, dishonesty, and a lack of patriotism, saying that their actions could negatively affect Egypt’s reputation at the international level.

The statement was issued after protesters marched in front of the Israeli Embassy in Cairo Friday and through Saturday night, calling for the expulsion of the Israeli ambassador along with other Embassy personnel. Egyptian security forces had erected a security fence around the embassy premises after earlier protests, but the protesters tore it down and climbed to the top of the building waving the Palestinian flag, as well as storming the building.

The protestors marched to the Embassy from Tahrir Square, where they challenged the interim government’s corruption and connections to the previous autocratic and dictatorial regime.