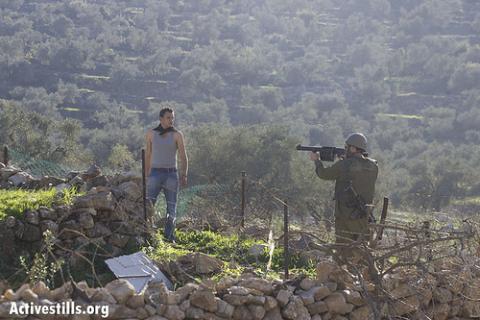 The Israeli human rights organizastion B’Tselem have stated that the Israeli military denies Palestinians the right to protest in the West Bank.A report published by the group on Monday, titled ‘Show of Force’ says that Israel does not recognize the ‘basic right’ of Palestinians to protest and responds to demonstrations with an ‘excessive use of crowd control weapons.’

The report adds that the Israeli military violates its own law and regulations by firing tear gas canisters directly at protesters, and in most cases the army treats protests as disturbances and disperses nonviolent processions with the use of military force.

The report was based on a study made in the town of Nabi Saleh, near Ramallah, whose residents have been organizing protests, for more than eighteen months now, every Friday, against settlers seizing nearby land that belongs to residents of the village.

In the past five years, nonviolent processions have been the dominant form of protests against all Israeli military operations in the West Bank and the Gaza Strip including the construction of the wall and expanding settlements, such as, Bil’in, Ni’lin, al-Walaja, Saffa, Beit Ummar and many other villages in the West Bank.