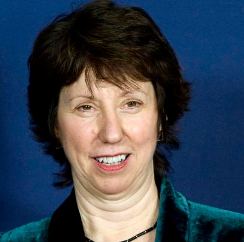 He added that the recent German stances regarding the issue were not fully positive, as Germany tried to talk Abbas out of the U.N. bid.

On her part, Ashton stated that “the only option for progress towards peace is negotiations” and that the E.U. wants to see the Palestinian and Israeli people living side by side in peace and stability.

Her statements came after a meeting with Egyptian Foreign Minister, Mohammad Amro.

She said that envoys visited Egypt several times, and that “as far as the peace process and the Palestinian State, there is still not definitive solution, and no unified European stance regarding the U.N. move”.

Ashton stated that the only clear stance in the E.U. right now is the need to restart peace talks.

Meanwhile, President Abbas raised the Palestinian flag on his home adhering to a popular campaign calling for raising Palestinian flags on all homes and vehicles to express support to the move.

The peace process between Israel and the Palestinians started in the early nineties, but real progress on the ground was never achieved, and Israel conducted its most dangerous settlement construction and expansion while it was negotiating “on the future of the occupied territories”.

Israel also considers talks on Jerusalem, borders, natural resources and the right of return of the Palestinian refugees, as red lines.

During their Sunday preliminary meeting, the Foreign Ministers of the Arab League expressed full support to the Palestinian move, and slammed Israel for its violations and ongoing settlement activities. The ministers are planning to hold another meeting Tuesday;

The U.S. recently stated it is going to use its veto power against the Palestinian move at the United Nations.

The Palestinians need the Security Council’s approval to become a member state at the United Nations, instead of the current observer status.