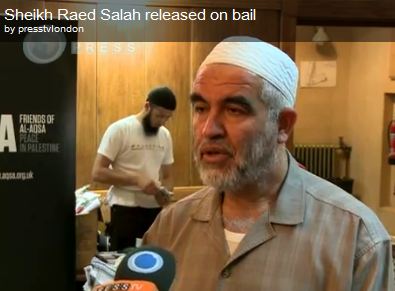 Sheikh Raed Salah, head of the Northern Branch of the Islamic Movement, decided after consulting his team of lawyers, to file a lawsuit against the British Authorities for arresting him, and for issuing a deportation order against him.Sheikh Salah said that he will not be leaving the U.K before the real motives of his arrest are revealed.

On June 29, British Home Secretary, Teresa May, issued a deportation order against Sheikh Salah for allegations of anti-semitism.

The British Immigration Court will be looking on September 27th and 28th into an appeal file by the attorneys of Sheikh Salah against the deportation order.

On September 14, the court will be deliberating the “legality of the deportation order” against Salah, a move that is seen as an attempt to preempt the deportation appeal.

Lawyer Hassan Abu Hussein, one of the defense lawyers of Salah, stated that the British Ministry of Interior is basically using Israeli files and fabrications, used by Israeli courts against Salah, and that London is practically prosecuting Salah for his activities in occupied Palestine, and for being part of the Freedom Flotilla.

He added that the allegations against Salah have no solid foundations, and were only meant to appease the Israeli lobby.

The Islamic Movement issued a press release stating that it will defend Sheikh Salah at all times, and that the arrest made in Britain “was a Zionist decision implemented by London”.

After his release on bail, Sheikh Salah met with leaders of the Jewish Orthodox anti-Zionist group, Neturei Karta, and thanked them for supporting him and for standing by the thousands of Arabs, Muslims and British supporters who held massive protests in London against his arrest.

The bail agreement obliges Sheikh Salah to report to an immigration center on a daily basis, and also prevents him from speaking in Public, in addition to forcing him to observe a 15-hour nightly curfew.