Sharaf: “Camp David Accord Not Sacred” 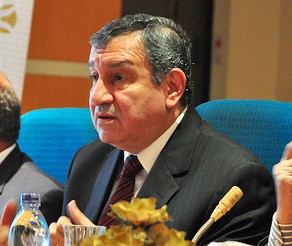 He further stated that by killing the Egyptian soldiers across the border wit Eilat a month ago, was an Israeli aggression against the Egyptian people, against their pride and their love to their country.

Sharaf further stated that the Israeli attack targeted the the Egyptian dignity, and that the public response to this attack was not over-exaggerated.

Referring to Ankara, Sharaf said that the Turkish-Egyptian relations are very good, and that he is looking forwards to boosting this relation to an excellent level.

“The two countries have power that should not be taken lightly in the region”, The Egyptian PM said, “Turkey and Egypt want a just peace in the region, they want development and progress”.

As for the recent U.S. and European moves, and official visits to the region, especially to Palestine and Israel, Sharaf said that the visits came during a time of real changes taking place in the region, and that world powers must be concerned about the heart of the conflict instead of its surface.

Camp David Peace Agreement between Israel and Egypt was signed in Maryland – USA on September 17, 1978. The then-president of Egypt, Anwar Sadat, and Israeli Prime Minister, Henchman Begin singed the deal under the supervision of former U.S. President, Jimmy Carter.