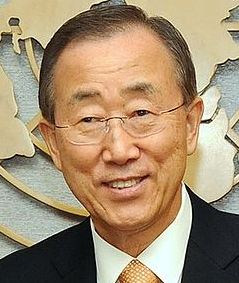 United Nations Secretary-General, Ban Ki-moon, called on the Palestinian leadership to return to negotiations with Israel, adding that the impasse of talks is negatively affecting all countries in the Middle East.He also called on both Israel and the Palestinians to compromise and make concessions in order to ensure the resumption of talks.

“I urge Israel and the Palestinians to start meaningful peace talks” the U.N. chief added, “The International Community has the responsibility to create the suitable circumstances”.

He softly criticized Israel for its recent approval for the construction of Israeli settlements in the occupied territories, by describing the decision as “unhelpful”.

Ban further stated that the Palestinians must try to hold talks with Israel.

The U.N. official failed to mention any of the United Nations and Security Council resolutions Israel elected to ignore decades ago until now, in addition to Israel’s lack of seriousness in talks and the implementation of signed deals, He instead stated that “only direct talks can lead to the establishment of a Palestinian state”.

He said that the absence of talks between Israel and the Palestinian is casting its effects on the security situation of the entire region, and also referred to the crisis between Tel Aviv and Ankara, in addition to the massive protests held in front of the Israeli embassy in Cairo.

Ban said that the relations between Israel and Turkey, and the “embassy attack” in Cairo are “worrisome”, and stated that strong relations, and strong leaderships in the region, are required for a lasting peace.