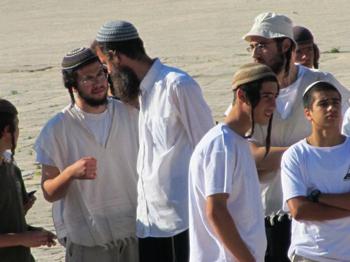 When Israeli settlers increase their attacks against Palestinian citizens in the West Bank, they usually observe their movements first before attacking them in remote areas.Iyad Sanafra is one of many Palestinians who endured the settlers’ aggression.

Image Snafra, a Palestinian worker from Balata refugee camp in Nablus, was coming home on Wednesday exhausted after a long day of work in Qalqiliya. Instead of meeting his family, Snafra was attacked by a group of violent settlers near Yitzhar settlement near Nablus, and Snafra was taken to the hospital. According to medics, Sanafra’s upper jaw was broken and he is now staying in the operating room.

His cousin Salah, the driver, described to PNN what happened: they were driving on a main street near Yitzhar settlement when at least three settlers started throwing stones at their car. One of the stones broke the front windshield and hit Iyad in his face. Another stone hit his chest.

There was a settler on the edge of the road as usual, Salah added. He was not at first involved, but when the Palestinian car got closer he gave a sign to the settlers on a hill who started tossing stones at them.

Settlers in the West Bank are increasing their attacks against the Palestinians, particularly in the areas closer to the settlements. Meanwhile, the Israeli army trains groups of settlers to repress and attack Palestinians who are expected to march after the UN statehood bid.

Ra’fat Abu Khader, a researcher with the Palestinian Center for Human Rights describes settlers’ attacks as human rights violations. He said Palestinians should have the right to live a secure and safe life on their land.