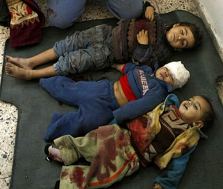 Elizabeth, the Queen of England, signed an amendment that would prevent the issuing of arrest warrants against Israeli officials accused of committing war crimes, UK ambassador in Tel Aviv said. Despite the symbolic nature of her signature, it comes to show ‘royal approval’ of the law.The Queen singed “The Police and Social Responsibility Act” that was approved by the British parliament, that includes a very important segment in favor of Israel as it states that the justice system in the Kingdom cannot “be abused for political gains”, UK ambassador in Tel Aviv, Mathew Gould, told Israeli Ynet news.

Although symbolic, the Queens’ signature is an act that shows ‘royal approval’ for preventing any act that targets Israeli officials, and other world officials, who could be facing lawsuits for war crimes allegations.

The Jurisdiction Law itself was approved by the British Government in an attempt to prevent activists from obtaining arrest warrants against officials, especially Israeli government officials, who visit Britain.

The law previously allowed private complaints of war crimes to be lodged against military personnel even if they were not British citizens and the alleged crimes were committed elsewhere.

The Ynet News reported that Gould stated that his country will continue to respect its international obligations by arresting the guilty persons, but added that his country that no arrests should made without what he called “a realistic chance of being actually prosecuted”.

He told the Ynet that this amendment will also prevent the issuing of arrest warrants against visiting officials of at least five other countries.

The Ynet quoted Gould stating that the new amendment will not prevent the arrest of “persons involved in war crimes”, but will prevent “unfounded warrants”.
Under the new amendment, issuing warrants of universal jurisdiction in the country would require the approval of the Director of Public Prosecution.

Gould did not wait for the new amendment to be officially made public, and opted to personally call former Israeli Foreign Minister, current opposition leader, Tzipi Livni, to personally “announce the good tidings”.

Livni had an outstanding arrest warrant against her on December of 2009.

Thanking Gould, Livni said that “this is considered a wake-up call for London”, and that this amendment will end what she described as “abuse of British Laws”.

Besides several Israeli officials, dozens of Israeli Army commandos and leaders faced arrest in London after lawsuits were filed against them by pro-Palestinian and human rights groups, especially after the three-week Israeli war on Gaza dubbed by Israel as “Operation Cast Lead”. The war started on December 27, 2008.

During the war, the Israeli Army bombarded medical centers and hospitals, UNRWA facilities and schools, homes and even ambulances. 1419 Palestinians were killed and thousands were wounded. Most of the casualties were civilians, including infants, children, elderly, medics and a number of journalists. 13 Israelis, including 9 soldiers (4 killed by friendly fire) were killed during the war.