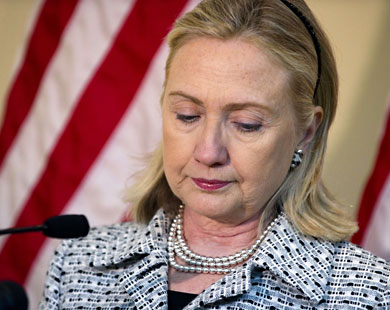 US Secretary of State, Hillary Clinton, stated Thursday that Palestinians should void their bid for statehood at the United Nations, claiming that “The two-state solution route is through Jerusalem and Ramallah, not New York,” Qatar-based Al-jazeera Channel reported late on Thursday. Clinton said in a press conference during a visit to the City of San Francisco, “We are completely convinced that the only way for peace and two-state solution route is through Jerusalem to Ramallah, not by going to the UN.” The US supports direct peace talks.

“I do not have a specific rate of our success, but I definitely guess that there is increased recognition – not only between parties concerned, but also on the international level – that there is no real solution for our concerns except direct negotiations over outstanding issues such as borders, security and other issues can not be compromised except by direct negotiations, and they won’t be compromised at the UN,” She added.

White House Secretary Press, Guy Carney, claimed that the White House is willing to help Palestinians to have a nation of their own, but going to the UN seeking for statehood – as what Abbas wants – is “not feasible”.

“We have a clear position regarding September bid,” He said during a daily press conference before reporters, “Any Palestinian move at the UN would not be for the good of peace process in the Middle East.”

“Our goal is to get Palestinians to their aim at the end, and the only way to establish a Palestinian state is through direct peace talks with Israel,” he told reporters.

Israeli Prime Minister, Benjamin Netanyahu, said Thursday that he will be delivering a speech at the UN Security Council to speak out against the Palestinian President’s speech for statehood next week, demanding for an independent Palestinian state on the borders of 1967. Meanwhile, the Palestinian Leadership will submit its bid for full membership at the UN on Sep 23.

Palestinian Minister of Foreign Affairs, Riyad Al-Maliki, announced in a news conference in Ramallah that the Palestinian authority’s top agenda is to go to the UN, demanding for full membership in the absence of a serious alternative.

“The Palestinian President, Mahmoud Abbas will be submitting the bid to the UN Secretary-General, Ban Ki-Moon, on the 23rd of the current month unless he receives “a serious offer” for the resumption of peace talks with Israel,” He added, in reference to the ongoing meetings with EU and US envoys.

Palestinian President, Mahmoud Abbas, reiterated on Wednesday that the Palestinian-UN bid for statehood is “a done deal”.

As Palestinians expect that the Washington would veto the Palestinian bid at the Security Council, Palestinian officials have pointed out that they might submit a bid to the UN General Assembly, demanding for increasing of Palestinian representation from an entity to a non-member nation as Vatican’s representation.

The Palestinian delegate to the United Nations, Riyad Mansour, stated on Thursday that the Palestinian Leadership, demanding for UN recognition of a Palestinian state, did not make any decision whether to submit the bid at the Security Council or General Assembly.

Abbas pointed out to the benefits from obtaining a Palestinian statehood, claiming that it will be giving the Palestinians the chance to participate at the International Criminal Court (ICC) and International Court of Justice (IJC) which “Israel and the US is not willing to occur.”

Abbas stressed the Palestinian terms regarding the resumption of peace talks, including complete halt of Israeli settlements’ constructions and establishing a Palestinian state on the borders of 1967.

On the European level, EU officials stated that the E.U Foreign Policy chief, Catherine Ashton, expanded timetable of its visit to the Middle East to hold more talks to void the Palestinian-UN bid which Israel strongly objects.

Ashton said that she has agreed on the Israel Prime Minister demand, asking her to hold another meeting, along with the planned meetings.

A senior UN official claimed that Ashton is trying to offer a proposal that includes a statement from the Quartet Committee for Middle East Peace, setting grounds for future Palestinian-Israeli peace talks.

“I urge Palestinians and Israel to resume negotiations,” The UN chief added in a news conference in the City of New York, “The international community has responsibility to create the suitable circumstances.”

He added that Israel’s approval for the construction of more settlements in the Occupied Palestinian Territories “Does not help” to push peace efforts forward. However, he called on both Israel and Palestinians to compromise and make concessions in order to ensure the resumption of talks.

“The Palestinian bid requires a comprehensive political revision along with returning back to the Palestinian national constants” the alliance, includes the Islamic Resistance Movement (Hamas) and the Islamic Jihad Movement, the Popular Front for the Liberation of Palestine and the Democratic Front for the Liberation of Palestine along with other factions, announced in a joined press statement.

“Any Palestinian or Arab move should not be at the expense of national and historical rights of Palestinians especially the Right of Return, self-determination and Jerusalem’s issue,” the statement added.

In a separate stand, the Hamas Movement considered the Palestinian bid for statehood is “A dangerous adventure and may affect the unalienable Palestinian rights.”

“Thinking of this unplanned step expresses a real political crisis that Oslo authority (PA) is being through, starting from the failure of negotiations, and issuing statements which are not in the good of the Palestinian People,” Hamas’ spokesman, Sami Abu Zuhri, said in a statement during a political forum in Gaza on Thursday.