Abbas to Address his People 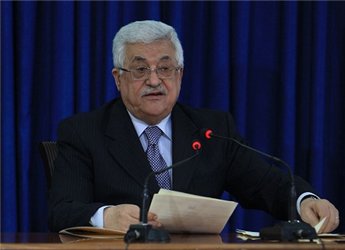 Palestinian President, Mahmoud Abbas, will be delivering a speech to the Palestinian people at which he would announce the final Palestinian-UN bid for statehood amid the growing tension regarding the Palestinian plan of the universal vote for the bid in order for Palestine to be a full membership at the International body along with an independent Palestinian state, the Maan News Agency reported.
This move would confuse Israel which warned of “devastating consequences” against Palestinians.

Palestinian officials stated that President Abbas will be clarifying the Palestinian-UN bid to his people, the goal behind going to the UN and the consequences of that bid, Dr. Mohammed Ishtiyeh told Maan.

Abbas adheres that Palestine Liberation Organization (PLO) is the solely legitimate representative of the Palestinian People on all levels until establishing a Palestinian state and removing the Israeli Occupation.

He is expected to announce that Palestinians are ready to resume halted negotiations if the conditions for the resumption are met, whether after seeking statehood at the UN or before, calling on the Palestinian people to maintain peaceful activities of their protests against the ongoing Israeli Occupation.

On Thursday, the US Administration sent two senior envoys to the Middle East, reaffirming the US objection regarding the Palestinian bid for statehood.

The US Washington Post Daily Newspaper reported that US envoy in the Middle East, David Hale and the US National Security Advisor, Dennis Ross, are paying visit for the second time to the Middle East within a week, amid blackout of their offer to the PA President Abbas and the Israeli Prime Minister Netanyahu.

Abbas received the US special envoy to Middle East for peace process at his headquarter in Ramallah along with the US senior official, Dennis Ross, the US consultant, Daniel Rubinstein, PLO Executive Committee member, Dr. Saeb Ereikat, and the official PA presidency spokesman, Nabel Abu Rdeinah.

Palestinian officials in the West Bank called on Palestinians to make mass demonstrations in all parts of the West Bank announcing their support for the Palestinian bid for statehood, adding that Israeli soldiers and police officers widely spread out to be set for any developments over the political situation and in case that Palestinian peaceful rallies might reach the Israeli checkpoints and settlements, the paper reported.

President Mahmoud Abbas will be delivering a speech at the UN next week, demanding for a Palestinian statehood on the borders of 1967 and full membership at the UN.

On the other hand, Israeli Prime Minister, Benjamin Netanyahu, will be addressing the UN Security Council to speak out against the Palestinian statehood recognition bid, warning that obtaining a full membership at the UN would have “catastrophic consequences” on the Palestinians.