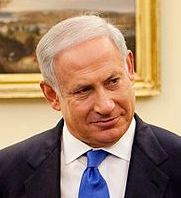 In response to the Palestinian President’s speech, delivered Friday evening, in which he confirmed the Palestinians will go ahead with the statehood bid at the United Nations, Israeli Prime Minister Benjamin Netanyahu described the statehood bid as a ‘foolish step’, the Maan News Agency reported. “Peace cannot not be achieved through unilateral moves, and by heading to to the UN’, a statement by Netanyahu’s office reads, ‘However, peace can only be achieved through direct negotiations with Israel,” .

The statement also claimed that the Palestinian Authority (P.A) is running away from the direct talks with Tel Aviv.

‘Once the P.A voids its absurd UN move, it will find Israel as a partner for peace’, the statement adds.

On Friday evening, the Palestinian President, Mahmoud Abbas, delivered a speech confirming that the P.A is determined to head to the United Nations to seek full membership instead of its current observer status.

Abbas further stated that should Tel Aviv stop its construction and expansion of settlements, halt all of its violations, and fully withdraws to the 1967 borders, it will find a Palestinian partner for peace based on all related United Nations and Security Council resolutions.