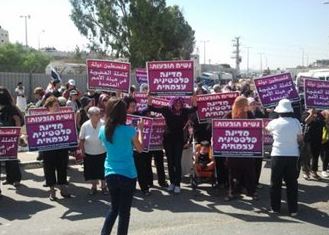 Israeli soldiers tightened on Saturday the security measures at the Container Roadblock, 10 Km northeast of Bethlehem, in ‘Wadi El Nar road’ (The Valley of Fire Road) and the Qalandia Terminal, north of Jerusalem.Wadi El Nar, a long downhill-windy, curvy, dangerous road, became the only road Palestinians allowed to use to travel between the northern and southern part of the West Bank. And as of September 2000, only commercial vehicles carrying an Israeli issued permit are allowed to pass through the Container checkpoint. (bethlehemassoc.org).

Eyewitnesses reported that the army is holding hundreds of Palestinian vehicles, inspecting them and ordering them back.

The checkpoint is the only passageway the Palestinians have to go through in order to move between the southern and northern parts of the West Bank.

Maan News Agency reporter in Jerusalem reported that the army also closed the Qalandia Terminal, north of Jerusalem by placing large concrete blocks on the street to prevent the vehicles from reaching the terminal.

The Israeli measures and restrictions came after Palestinian President, Mahmoud Abbas, delivered a speech on Friday confirming the Palestinian determination to head to the United Nations and the Security Council to demand international recognition of statehood. Israel and the United States are leading the countermeasure to foil the move, especially after Israel guaranteed the U.S Veto against the move.

More roadblocks, closures and more invasions into certain areas are a very likely scenario as we are approaching September 23rd, the date when Palestinian President, Mahmoud Abbas will be submitting the bid to the UN Secretary-General, Ban Ki-Moon.

During his Thursday speech, Abbas said that unless he receives “a serious offer from the EU and the US” for the resumption of peace talks with Israel, the Palestinian leadership will go ahead with its UN-bid.