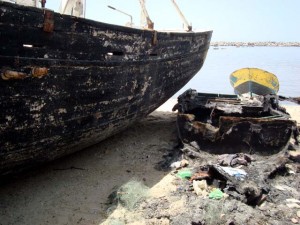 Mahfouth Al Kabarty, head of the Palestinian Committee for Fishing and Maritime Sports in the Gaza Strip, reported that the Olivia boat, operated by international activists who accompany Palestinian fishing boat and document Israeli attacks against them, was rehabilitated and prepared to, once again, accompany Palestinian fishermen.Al Kabarity stated that the boat was repeatedly attacked and sabotaged by the Israeli Navy, and that it will resume trips in the coming days.

Activists onboard the boats are nonviolent, and became subject of frequent attacks carried out by the Israeli Kabarity.

Al Kabarity added that the decision to resume the activities of the boat is based on the wish and willingness of the fishermen who are subject to escalating Israeli military attacks.

Some fishermen stated that the Israeli Navy is threatening to open live fire at them, detain them, and confiscate their boats should they accept to be accompanied by Olivia.

Al Kabarity added that the fishermen have the right to fish in peace in their territorial waters, and called on the international community to intervene and stop the Israeli violations.

On September 15, the Israeli Navy attacked Palestinian fishing boats near the shore, in southern Gaza, and kidnapped five of them after damaging their boats.

On July 14th, the Olivia was attacked by the Israeli Navy and lost communications for an hour; the boat was located near the Gaza Shore

On July 23rd, the Navy surrounded the Olivia while it was only two and a half miles off the Gaza shore, and fired rounds of live ammunition at it despite the fact the international activists used loud speakers identifying themselves and asking the soldiers not to shoot.

Israeli attacks against Palestinian fishermen lead to dozens of casualties, and dozens of fishermen were kidnapped, while several boats were destroyed or sabotaged.

There are nearly 3000 families in Gaza that depend on fishing as the only source of livelihood.