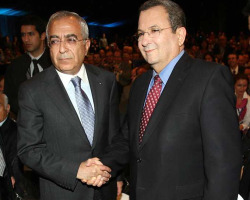 Palestinian Prime Minister, Salam Fayyad, held a meeting with the Israeli Defense Minister, Ehud Barak, in the US capital of Washington earlier Monday. European Union Officials said that senior diplomats in the Quartet Committee for peace held a meeting at the UN headquarter, trying to convince Palestinians to void submitting their bid for a full membership at the International body, Qatar-Based Al-Jazeera Channel reported.Barak and Fayyad discussed key issues on top of which is the Palestinian-UN bid for statehood, according to Israeli news agencies, adding that meeting discussed the possibility of backing-off to submit the bid to the UN as well as possible formulas to resume stalled Palestinian-Israeli peace talks.

Palestinian President, Mahmoud Abbas, will be participating annual meetings of the UN General Assembly in the City of New York in which he will submit the Palestinian bid for full membership at the International body on the 1967 borders based on the international conventions.

Earlier on Sunday, Abbas called upon the Israeli Prime Minister, Benjamin Netanyahu, to vote in favor of the Palestinian bid for full membership at the UN to achieve peace and security between the two states.

“I say to Netanyahu what some 500 Israeli intellectuals said… they said that if we were Netanyahu, we would head along with Abbas and submit the bid for full membership if we want to live in peace with Palestinians” Abbas said.

The Israeli radio station reported that Netanyahu will head to New York on Tuesday and will hold a meeting with the US President, Barak Obama, on Wednesday.

Netanyahu is expected to deliver his speech at the UN General Assembly upcoming Friday after Abbas’s speech which he will be delivering his speech on the same day, added the radio station.

Last Thursday, Netanyahu announced that he will be heading to the UN General Assembly to deliver his speech, confirming that he will tell the “truth” which is that Israel wants peace with Palestinians and that Israel has been calling for the resumption of stalled Israeli-Palestinian negotiations since two years and a half, but his call has not been received yet.”

Meanwhile, a European Union official said that senior diplomats from the US, Russia, EU and UN, representing the international Quartet Committee, held a meeting at the international body headquarter in New York in an attempt to convince Palestinians to cancel their bid for full membership at the UN.

In addition, the US Secretary of State, Hillary Clinton, held a meeting with the EU Foreign Policy Chief, Catherine Ashton.

The US reconfirms its threats of using the veto at the UN Security Council against the Palestinian bid. However, Toney Blair, the Quartet envoy, said on Sunday that it is still possible to avoid a conflict between the Palestinian bid and the US veto.

“Palestinians are right here in New York. So, the question is: Can we find a way that Palestinians could take important steps to establish statehood instead of heading to the International Body?” Blair told reporters.

The Quartet has been trying to make an outline for Israeli-Palestinian peace talks since several months, but it could not reach an agreement regarding the outstanding issues.

The last round of the US-broker negotiations between Abbas and Netanyahu has collapsed about a year ago. So, Palestinians halted the negotiations with Israel after the latter refused to partially freeze construction of Israeli settlements on the Palestinian lands in the West Bank.

Besides, borders, Jerusalem, the future of the Palestinian refugees and Palestinian recognition of Israel as a Jewish state are the key outstanding issues between the two sides.

On Sunday, donors of the Palestinian Authority called on the P.A to resume stalled peace talks with Israel, considering the ongoing struggle threatens the planned Palestinian state.

“The message, emanating from the meeting, that there is an urgent need for the resumption of peace talks in order to head forward to establish two states, Palestine and Israel, living in peace side by side” Storey said.

“There are no indications that donors would link the financial support with the Palestinian-UN bid for full membership. But donations have declined during last few months,” he added.