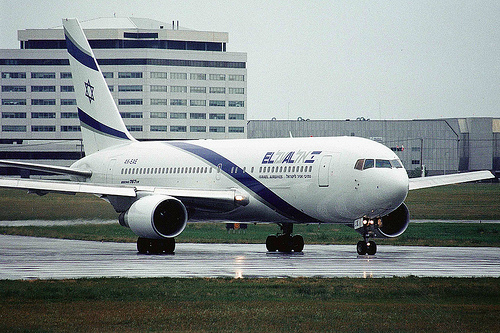 The main Israeli-owned airline, El Al, in collaboration with the Jewish Agency, the group ‘Stand With Us’, and the Israeli Foreign Ministry, has launched a campaign to send Israeli pilots and flight crews to speak in US cities promoting Israel.The program heads have selected certain pilots and crew members, out of hundreds who volunteered for the Public Relations talks, that they have designated as representing ‘the beautiful, positive apolitical face of the State of Israel.’

Promotion efforts by the Israeli Foreign Ministry and Stand With Us have increased significantly in the last two years around the world, with efforts aimed at painting a picture of Israel as an ‘apolitical’ and ‘positive’ place with no mention of the ongoing ethnic cleansing of Jerusalem, siege on the Gaza Strip, and armed territorial expansion throughout the West Bank.

In one botched effort, Stand With Us sent Israeli soldiers to college campuses in South Africa, where they were met by massive protests from students who compared the Israeli treatment of Palestinians with the treatment of black South Africans by white South Africans under the apartheid regime.

It is unknown whether protests are planned at the US events, but Adalah New York has pledged to protest any Stand With Us – sponsored events, which they say promote racism and try to cover up Israeli war crimes against the Palestinians.

The three cities that will be targeted by the Public Relations blitz will be New York, Los Angeles and Toronto. These are all cities where considerable efforts have been made by activist groups engaged in campaigns to Boycott, Divest, and impose Sanctions on Israel in order to pressure the Israeli government to adhere to its obligations under international law.