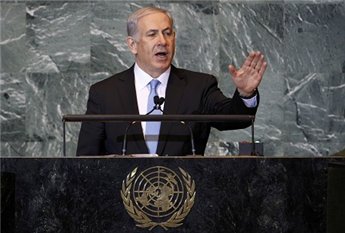 Israeli Prime Minister, Benjamin Netanyahu, addressed the Palestinian Leader, Mahmoud Abbas, asking him to hold a meeting together today at the UN headquarters to re-start the stalled Palestinian-Israeli direct negotiations, the Maan News Agency reported late Friday.Netanyahu said in his speech at the UN General Assembly, addressing the Palestinian leader, “I am extending the hand in peace and I hope that you grasp this hand.”

“Peace won’t be achieved by the international resolutions, the only way to be achieved is through direct negotiations with Palestinians” he added.

The Israeli leader tried to reduce the eco of the Palestinian President’s speech at the UN, which received a great chants and applauses by UN members, saying that Israel extended its hand to all peoples of the region particularly the Palestinian people.

Netanyahu described the Palestinian speech as “an embarrassing attack when Abbas described Israel with discrimination, considering (Netanyahu) that Israel is the state of the real and only democracy in the Middle East.

Netanyahu accused Palestinians that they are not willing peace to be achieved. They want to establish a state with peace, and I see that establishing a Palestinian state can be achieved only by direct negotiations.

“Sometimes, truth does not show up (..) But I hope that the light of truth would show up today at least for few minutes, in a hall which had been always a dark place for my country, and I did not come up here today to receive your applause but to say the truth.”

“But with all my reservations, I was willing to move forward on these American ideas. (..) And I am telling Mahmoud Abbas to stop negotiating about negotiations, let’s negotiate peace”

He claimed that Israel submitted 2000 offers for peace but the Palestinian late leader, Yasser Arafart, rejected them. “They committed a terrorist attack, killed thousands of Israelis,” he added.

He told UN members that the Israeli former Prime Minister, Ehud Olmert, made an offer in 2008 but Abbas did not show any intentions to negotiate.

He accused what he described “Militant Islam” that controls the UN Security Council such as Hezbollah, saying that “there is a terrorist organization that controls international bodies.”

Netanyahu used the term “Militant Islam” to raise concerns involving a danger that threatens the whole world including Jews, Christians and Muslims.

He said that “Militant Islam” controls Lebanon and Gaza and it is trying to tear up peace treaties with Egypt and Jordan.