Soldiers Open Fire At Vehicle Near Bethlehem, Father And His Daughter Injured 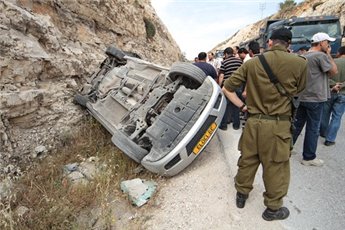 Israeli soldiers opened fire Saturday morning at a Palestinian vehicle on Tiqua road south east of Bethlehem leading the vehicle to flip over injuring the driver and his daughter. “Israeli military soldiers chased the vehicle on Tiqua’s main street used by the Palestinians who are indigenous to the area, and also used by Israeli settlers, and opened fire at the vehicle’, an eyewitness told the correspondent of Maan News Agency, ‘The car turned over and a father and his 17-year-old daughter were injured, and were also kidnapped by the soldiers’.

Also, an eye-witnesses said that settlers of Maale Amos illegal settlement, built on the lands of Tiqua Palestinian town, opened fire at several shepherds in the town of Kisan, next to Tiqua village; no injuries were reported.

On Saturday afternoon, dozens of settlers stormed the town of Burin, south of northern West Bank city of Nablus, and smashed the windows of a local vehicle.

Furthermore, dozens of settlers of Yitzhar settlement, south of Nablus, attacked civilians at the entrance of Burin and hurled stones at them and their vehicles; damage was reported, no injuries.

An eyewitnesses said that Israeli military patrols arrived at the scene, and fired teargas bombs and stun grenades.