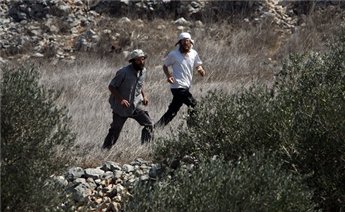 Dozens of Israeli settlers uprooted Sunday morning more than 400 olive trees in the towns of Qosrah and Douma, south of city of Nablus. Palestinian sources that this attack is the “fiercest” on the Palestinian lands, the Maan News Agency reported. Ghassan Douglas, settlement issue chief in the Northern of the West Bank, told Maan that dozens of Israeli settlers have uprooted and cut more than 400 olive tree in the towns of All-haf, and Sha’b El-Kherab, Ras En-Naheh and Nabou’h, near of Douma and Qosrah south of city of Nablus.

On Friday, Settlers have been escalating their attacks against Palestinians in Nablus and villages surrounding it in which they killed a Palestinian man.

On Saturday afternoon, dozens of settlers stormed the town of Burin, south of northern West Bank city of Nablus, and smashed the windows of a local vehicle.

Furthermore, dozens of settlers of Yitzhar settlement, south of Nablus, attacked civilians at the entrance of Burin and hurled stones at them and their vehicles; damage was reported, no injuries.

An eyewitness said that Israeli military patrols arrived at the scene, and fired teargas bombs and stun grenades.