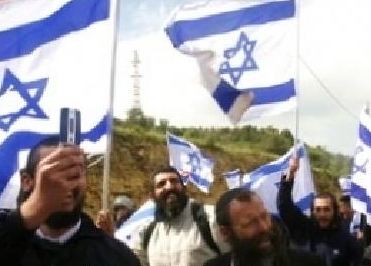 Dozens of armed Israeli settlers put up Israeli flags and posters on main and bypass roads close to Jewish settlements in the southern part of the West Bank, calling for slaughtering Arabs and Palestinians.Racist posters were also placed along the Jerusalem-Hebron road, and around all settlements extending from the southern part of Bethlehem district to the northern part of Hebron, the Maan news Agency reported.

Some of the posters read “We Will Slaughter All Arabs”, “This is the land of our fathers and forefathers”, and dozens of similar racist posters.

The settlers also camped in Palestinian farmlands and orchards south of Bethlehem, and preventing the residents from reaching their own lands.

Settlers living in the city of Hebron also hung Israeli flags and racist posters threatening to kill the Palestinians and calling for their expulsion.

The settlers also placed posters at the fence of Efrat settlement, and other settlements near Bethlehem, Maan added.